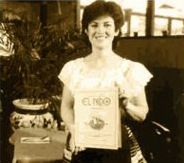 Alfredo Soltero was born in Mexico and brought to the U.S. at an early age. He grew up in San Francisco during the ’60s and ’70s, where he finished school at San Francisco State. In 1971, Alfredo started working as a cook at Celia’s restaurant in the city, where he met his soon-to-be wife, Siria, a waitress at Celia’s as well.

Alfredo and Siria married in 1975 and started working on growing their family. In 1977, they had their first daughter, Alexandra. As the years went on, Alfredo mastered the art of cooking and learned to bartend, and he and Siria felt it was time to open their own restaurant. They found the perfect location in Danville, CA – An upstairs location in the village shopping center.

El Nido (The Nest) was opened in 1983, becoming a Danville staple for 3 decades and counting. After 5 years, Joaquin Alcala joined the family business, becoming head chef. Joaquin brought years of experience and amazing recipes from the Michoacan region in Mexico – Dishes such as our signature Carnitas and made-to-order, Chicken soup. At the same time, Alfredo and Siria continued to grow their family, eventually having 7 daughters – Alexandra, Erika, Julia, Angela, Siria, Veronica and Raquel. All have been involved in the family business.

So as you can tell, “Our Family Serving Yours Since 1983” isn’t just a slogan. It’s what we do. We’re proud to be a true family-run business, with everyone having been involved with making this restaurant a success.

For over 30 years, the Soltero family and our passionate staff have been serving Danville and the surrounding communities authentic Mexican cuisine. You’ll find us on the second floor of The Village Shopping Center in Downtown Danville. Come see us! Or let us come to you.

Tuesday through Saturday
11am to 3pm (Lunch)
5pm to 9pm (Dinner)